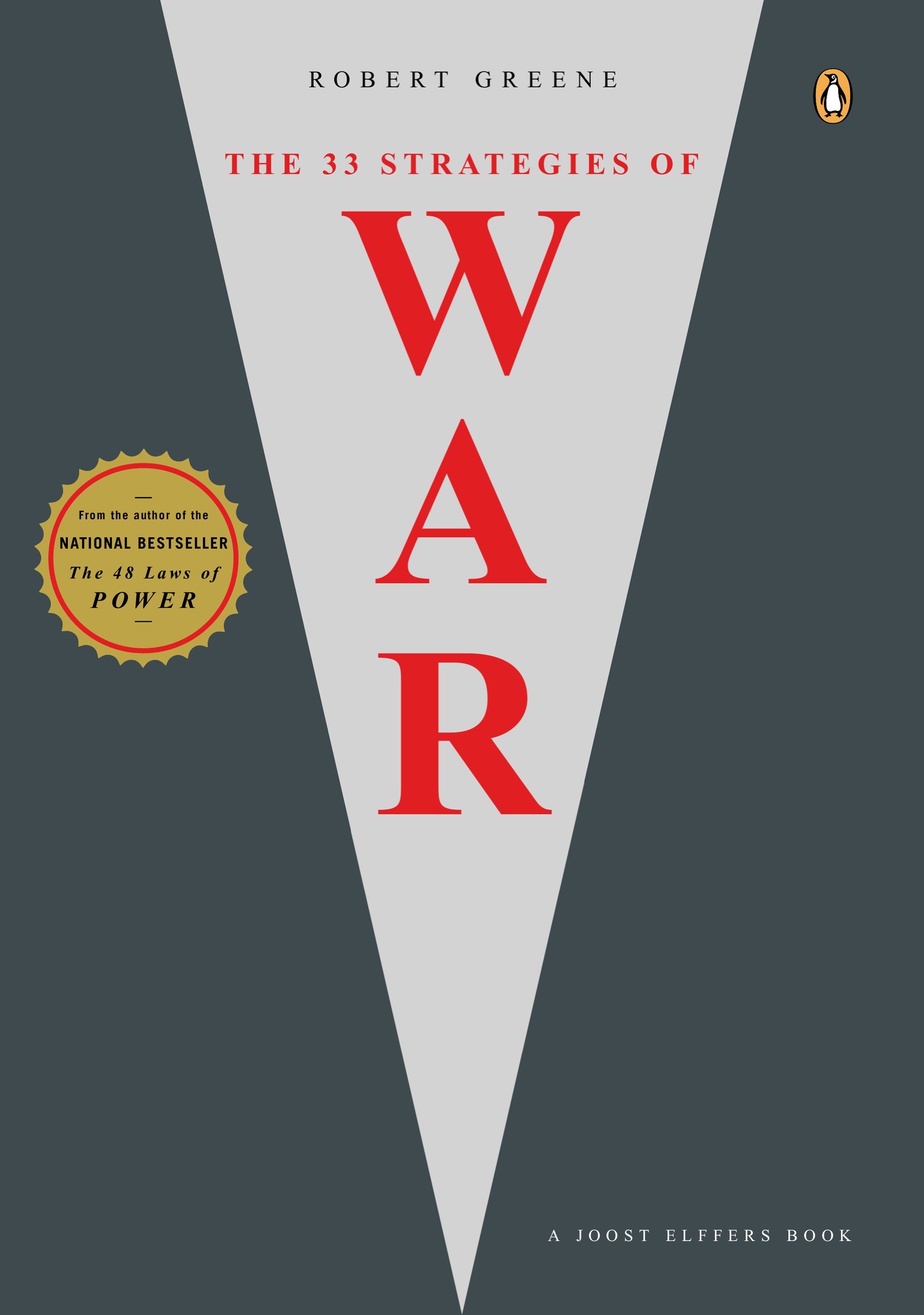 The 33 Strategies of War Summary

The 33 Strategies of War

Declare war on your enemies: Polarity

You cannot fight effectively unless you can identify them. Learn to smoke them out, then inwardly declare war. Your enemies can fill you with purpose and direction.

Do not fight the last war: Guerilla-war-of-the-mind

Wage war on the past and ruthlessly force yourself to react to the present. Make everything fluid and mobile.

Amidst the turmoil of events, do not lose your presence of mind: Counterbalance

Keep your presence of mind whatever the circumstances. Make your mind tougher by exposing it to adversity. Learn to detach yourself from the chaos of the battlefield.

Create a sense of urgency and desperation: Death-ground

Place yourself where your back is against the wall and you have to fight like hell to get out alive.

Understand: your mind is weaker than your emotions. But you become aware of this weakness only in moments of adversity–precisely the time when
you need strength. What best equips you to cope with the heat of battle is neither more knowledge nor more intellect. What makes your mind stronger, and more able to control your emotions, is internal discipline and toughness.No one can teach you this skill; you cannot learn it by reading about it. Like any discipline, it can come only through practice, experience, even a little suffering. The first step in building up presence of mind is to see the need for it — to want it badly enough to be willing to work for it.

Avoid the snares of groupthink: Command-and-control

Create a chain of command where people do not feel constrained by your influence yet follow your lead. Create a sense of participation, but do not fall into groupthink.

The critical elements in war are speed and adaptability–the ability to move and make decisions faster than the enemy. Break your forces into independent groups that can operate on their own. Give them the spirit of the campaign, a mission to accomplish, and room to run.

Transform your war into a crusade: Morale

Get them to think less about themselves and more about the group. Involve them in a cause, a crusade against a hated enemy. Make them see their survival is tied to the success of the army as a whole.

Think of the mind as a river: the faster it flows, the better it keeps up with the present and responds to change. The faster it flows, also the more it refreshes itself and the greater its energy. Obsessional thoughts, past experiences (whether traumas or
successes), and preconceived notions are like boulders or mud in this river, settling and hardening
there and damming it up. The river stops moving; stagnation sets in. You must wage constant war on this tendency in the mind.

Consider the hidden costs of war: time, political goodwill, an embittered enemy bent on revenge. Sometimes it is better to undermine your enemies covertly.

Let the other side move first. If aggressive, bait them into a rash attack that leaves them in a weak position.

Build a reputation for being a little crazy. Fighting you is not worth it. Uncertainty can be better than an explicit threat. If your opponents aren’t sure what attacking you will cost, they will not want to find out.

A retreat is a sign of strength. Resisting the temptation to respond buys valuable time. Sometimes you accomplish most by doing nothing.

Our successes and failures in life can be traced to how well or how badly we deal with the inevitable conflicts that confront us in society.

Grand strategy is the art of looking beyond the present battle and calculating ahead. Focus on your ultimate goal and plot to reach it.

The target of your strategies is not the army you face, but the mind who runs it. Learn to read people.

Speed is power. Striking first, before enemies have time to think or prepare will make them emotional, unbalanced, and prone to error.

Instead of trying to dominate the other side’s every move, work to define the nature of the relationship itself. Control your opponent’s mind, pushing emotional buttons and compelling them to make mistakes.

Hit them where it hurts: Center-of-gravity

Find the source of your enemy’s power. Find out what he cherishes and protects and strike.

Defeat them in detail: Divide and conquer

Frontal assaults stiffen resistance. Instead, distract your enemy’s attention to the front, then attack from the side when they expose their weakness.

Create relentless pressure from all sides and close off their access to the outside world. When you sense weakening resolve, tighten the noose and crush their willpower.

Maneuver them into weakness: Ripening for the sickle

Before the battle begins, put your opponent in a position of such weakness that victory is easy and quick. Create dilemmas where all potential choices are bad.

Before and during negotiations, keep advancing, creating relentless pressure and compelling the other side to settle on your terms. The more you take, the more you can give back in meaningless concessions. Create a reputation for being tough and uncompromising so that people are giving ground even before they meet you.

You are judged by how well things conclude. Know when to stop. Avoid all conflicts and entanglements of which there are no realistic exits.

Everything in life can be taken away from you and generally will be at some point. Your wealth vanishes, the latest gadgetry suddenly becomes passé, your allies desert you. But if your mind is armed with the art of war, there is no power that can take that away. In the middle of a crisis, your mind will find its way to the right solution. Having superior strategies at your fingertips will give your maneuvers irresistible force. As Sun-tzu says, “Being unconquerable lies with yourself.

Weave a seamless blend of fact and fiction: Misperception

Make it hard for your enemies to know what is going on around them. Feed their expectations, manufacture a reality to match their desires, and they will fool themselves. Control people’s perceptions of reality and you control them.

Upset expectations. First do something ordinary and conventional, then hit them with the extraordinary. Sometimes the ordinary is extraordinary because it is unexpected.

The cause you are fighting for must seem more just than the enemy’s. Questioning their motives and making enemies appear evil can narrow their base of support and room to maneuver. When you come under moral attack from a clever enemy, don’t whine or get angry–fight fire with fire.

Deny them targets: The Void

The feeling of emptiness is intolerable for most people. Give enemies no target to attach. Be dangerous and elusive, and let them chase you into the void. Deliver irritating but damaging side attacks and pinpricks.

Seem to work for the interests of others while furthering your own: Alliance

Get others to compensate for your deficiencies, do your dirty work, fight your wars. Sow dissension in the alliances of others, weakening opponents by isolating them.

Give your rivals enough rope to hang themselves: One-upmanship

Instill doubts and insecurities in rivals, getting them to think too much and act defensive. Make them hang themselves through their own self-destructive tendencies, leaving you blameless and clean.

Take small bites to play on people’s short attention span. Before they notice, you may acquire an empire.

Infiltrate your ideas behind enemy lines, sending messages through little details. Lure people into coming to the conclusions you desire and into thinking they’ve gotten there by themselves.

Destroy from within: The Inner Front

To take something you want, don’t fight those who have it, but join them. Then either slowly make it your own or wait for the right moment to stage a coup.

Dominate while seeming to submit: Passive-Aggression

Seem to go along, offering no resistance, but actually, dominate the situation. Disguise your aggression so you can deny that it exists.

Sow uncertainty and panic through acts of terror: Chain Reaction

Terror can paralyze a people’s will to resist and destroy their ability to plan a strategic response. The goal is to cause maximum chaos and provoke a desperate overreaction. To counter terror, stay balanced and rational.