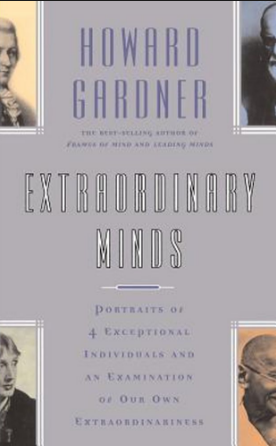 Extraordinary Minds: Portraits of 4 Exceptional Individuals and an Examination of Our Own Extraordinariness

Extraordinary individuals stand out in the extent to which they reflect—often explicitly—on the events of their lives, large as well as small.

Looking at how ordinary and extraordinary people develop, think and behave differently. Gardner sees 4 archetypes for extraordinary minds and profiles the quintessential example of each, then draws lessons.

Gardner spends a chapter looking at how children ordinarily develop into competent adults, and I won’t go into that here. Standard development psychology.

Gardner then looks at extraordinary development – especially kids with exceptionally high IQs. Not the Terman studies which looked at kids who were just “a lot smarter than average” and could skip a grade or two, but kids who have IQs of over 180.

These kids are generally not well-adjusted, “prone to anxieties and to severe social and emotional problems”, but do better when interacting with other kids like them. These kids “exhibit notable energy, curiosity and focus with reference to domains that interest them … They are persistent learners … Self-propelled and march to their own drummers”

Extraordinary individuals fail often and sometimes dramatically. Rather than giving up, however, they are challenged to learn from their setbacks and to convert defeats into opportunities.

Extraordinary individuals are distinguished less by their impressive “raw powers” than by their ability to identify their strengths and then to exploit them.

I see Freud as energized by three motivations: pleasure in classifying, lust for problem solving, passion for system building.

Discover your difference—the asynchrony with which you have been blessed or cursed—and make the most of it.

e.g  Mozart wrote tons of letters to friends, Freud was constantly thinking about his aspirations and the success/failures he encountered, Gandhi took daily walks, meditated, had strategy sessions, wrote lots of essays, books.

e.g. Freud was bad at math and logical reasoning, so created new field of psychoanalysis to leverage strengths of language and organizational abilities

e.g. Gandhi did not worry that he was a bad student or didn’t have authority within existing gov’t but used strengths of personal awareness, understanding Indian people’s psyche to create a revolution

e.g Freud was faced with constant setbacks with his theory’s acceptance, Gandhi absorbed many difficulties and criticisms and was able to convince his followers that they were triumphant even in moments of apparent defeat

If you aren’t impressed by this trio of features, imagine someone who never reflected, didn’t really use their strengths effectively, allowed their weaknesses to thwart their efforts, got discouraged by failures that they didn’t learn from.

Gardner ends with the point that society (esp Educators) must look for signs of extraordinariness in young people, esp. Makers and Influencers and support their growth to ensure that they will be humane and moral beings whose powerful effect on society ends up being positive, rather than negative.

This work is licensed under a Creative Commons Attribution-Share Alike 3.0 Unported License. /span>