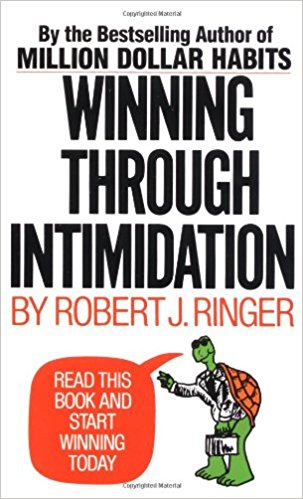 Every person has the inherent right to “self-proclaim”–to announce, at any time he chooses, that he is on any level he chooses to be on.

The Theory of Reality:

Reality isn’t the way you wish things to be, or the way they appear to be, but the way they actually are. You either acknowledge reality and use it to your benefit, or it will automatically work against you.

1. Theory of Sustenance of a Positive Attitude Through the Assumption of a Negative Result

A person shouldn’t enter a sales situation feeling he can’t make the sale, but he should really assume that he won’t make the sale. If you’re prepared, then you’re able to feel confident that you are capable of making the sale if it is possible to be made. Hope for the best, but realistically assume the worst.

No matter how well prepared you are, only a small percentage of deals actually control, because there are an endless number of factors beyond your control.

Most people wish that business took place on a nursery school playground, with fairness being enforced. The reality is that the game of business is played in a vicious jungle.

If you keep your nose to the grindstone and work long hard hours, you’re guaranteed to get one thing in return: Old. Hard work will not, in and of itself, assure a person of success.

Language is relative and subjective; you have to make sure that you define exactly what people’s statements really mean.

The most important factor to consider is whether something is relevant to what you’re trying to accomplish. Work only on things that are relevant.

For example, the builder’s cost is irrelevant to a buyer. All the buyer cares about is cash flow. Also, whether or not a person is “honest” is irrelevant. What matters is what he puts down in writing.

You are going to die. Therefore, you should go after all you can get, as quickly as you can get

You are going to die. Therefore, you should go after all you can get, as quickly as you can get it, because the reality is that your time is limited.

In 50 billion years, the sun will burn out and the Earth will be a frozen ice ball. Nothing you do now could possibly matter then. So don’t take yourself too seriously. Life is a game, and play to win. There’s no reason to be afraid to be aggressive or take chances. The reality is that there’s no way you’re going to get out of this thing alive, so why play conservatively.

There are only three types of people in the business world

In business, no one ever does anything for anybody else without expecting to gain something in return.

A person has no legal or moral obligation or, for that matter, logical reason to “work his way up through the ranks.” The quickest way to the top is not by fighting your way through the pack, it is to leapfrog over the pack and simply proclaim that you’re above it. However, you must be prepared to be above it, or reality will knock you back down.

The problems most people have in reaching their objectives revolve around the fact that they constantly allow themselves to be intimidated.

The results a person obtains are inversely proportional to the degree to which he is intimidated.

It’s not what you do or say that counts, but what your posture is when you say or do it. You need to maneuver yourself into a position of power.

Money: The ability to walk away—nice if you can get it

Image: The ability to prompt respect

Legal: The law, plus the Law of Universal Attorney-Attorney Respect. Always have everything in writing. Don’t be afraid to ask for it.

Performance: Be the best at what you do and deliver. Be fanatical about execution. This backs up your Image and Legal Power.

Don’t let anything get in the way of making the deal. If there are questions, dig out the answers yourself if necessary, rather than waiting for someone else to do it.

When he went to meet them, he brought along everything that he might need, from typewriters to law books, to 2-3 secretaries—so that nothing could hold up the deal, and to intimidate the hell out of people.

It’s more efficient to work hard on finding a few makeable deals, rather than working hard on an endless number of unmakeable deals and clinging to the faint hope that you’ll somehow close one. People have a masochistic tendency to work on “pie-in-the-sky” deals that have little possibility of closing.

Don’t call a contract a contract, call it a “one-page understanding.”

The longer a person fiddles around with something, the greater the odds that the result will be negative. Time is always against you when trying to make a deal—any kind of deal.

Before a person closes any kind of deal, he always worries that there may be a better deal down the road.

To combat the effect of these factors, bring the deal as quickly as possible to the point where the money is on the table and the papers are ready to be signed. Then it’s put up or shut up time.

Attorneys are not subject to intimidation like normal people, but if you cower, they will smell blood and strike. Instead of being tough or humble, play it cool. Be calm and matter of fact. Adopt an air that indicates you have no concern over the deal, that everyone knew the deal would happen.

There will almost always be several major undisclosed deal-killers that pop up at the 1-yard line. Soften the blow by setting expectations with the buyer ahead of time. That way, the dirty laundry reinforces your posture of expertise.

The best way to bluff is not to bluff. Wealthy people are good bluffers because when they threaten to walk away, they mean it. They can’t be intimidated.

If you’re not wealthy, the best substitute is guts. It’s more painful, but it works. Draw a clear line, and stick to it.

Perhaps the most important reason of all for taking action now is that time is finite. No matter how proficient you are, you can only accomplish so much in a lifetime. Every second that’s wasted reduces the totality of what you can accomplish by one second.