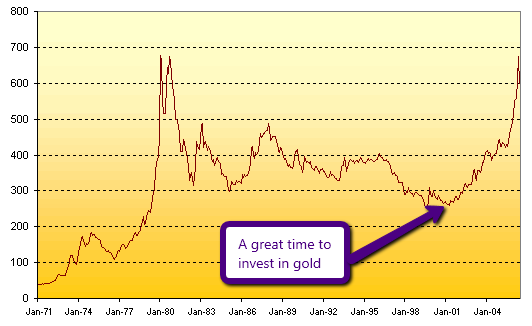 How to Ride an Investment Trend

Gold was an awesome investment back in 1999 when everyone was talking about selling gold.

Back then gold was seen as a stupid investment, it had plummeted in price for many many years.

There were incredible arguments why it should be sold. Governments around the world were selling off their gold.

They certainly were not expecting the price to go up.

Now Gold is touted as a great investment, AFTER it has increased in price for over 10 years.

Could it go higher? Definitely.

But a top could also be equally close.

Let’s not forget how the majority thought real estate was a great long term investment in 2005.

Where the crowds have a strong consensus on a ‘great’ investment, so much so the waitress can tell you its a no brainer, the likelihood a switch in direction is brewing becomes greater.

There are many good reasons to own gold, including in physical form. Just remember there were also incredibly logical fundamental arguments to buy real estate in 2005, and buy internet stocks in 1999. The arguments in the opposite direction were dismissed.

Who knows if Gold will truly soar to even greater heights, it may still have a long way to go, or it may not. Only the future will tell.

What we can be sure of is when it reaches it’s pinnacle top, more people will be spouting gold as the investment to be in.

Keep a level head and don’t get caught up in the “wisdom” of crowds.

Those who profit the most through changes in society and finance are true independent thinkers.

And remember, you don’t have to expose yourself to investment risk to invest in a booming trend.

In the real estate boom some people made millions online selling leads to real estate companies, and that money went straight into the bank. Arguably a much safer way to profit from a financial trend.

Gold did indeed drop of its high. It was a clear warning to me with sentiment towards gold so high. Gold probably has a bit further to drop before it starts a trend tthat would take it towards a new high, which could take many many years to play out.