I’m proposing that there is an inverse relationship between stocks, viruses and spam. Put simply when stocks go down, spam and viruses goes up.

Why would this happen?

Well when stocks turn down it signifies economic problems are on the way, and this is linked with a change in the behavior, mood and outlook of society as a whole. When the economy tanks people tend to be more negative and act more negatively.

All of the following tends to happen together:

That is not necessarily in order of cause and effect, but it signifies that they are all somehow related. Spam is generally considered a crime, so therefore it is reasonable to say that when stocks fall, spam increases.

It would also be reasonable to expect a potential lagging effect. The effects of stresses in the economy may take a while to create an event in an individual’s life, such as job loss, foreclosure, pay cuts and unmanageable debt, which may act as a trigger to turn the person to crime.

It will also take some time to set up a sophisticated spam system and/or create viruses.

But is there any evidence of this spam-virus-stock relationship?

In March, 2009 the Dow Jones Industrial Average (along with many other stock indexes across the globe) bottomed after a 50% drop. Stocks fell over a period of a year and a half starting after the Dow hit an all time high in October, 2007. 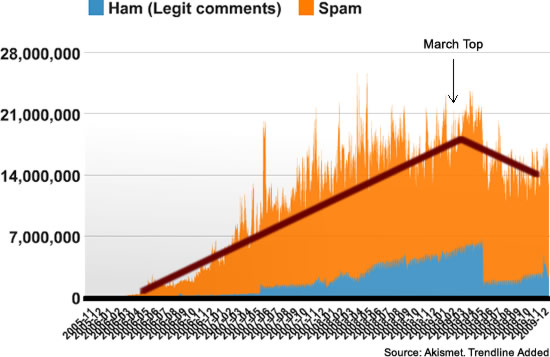