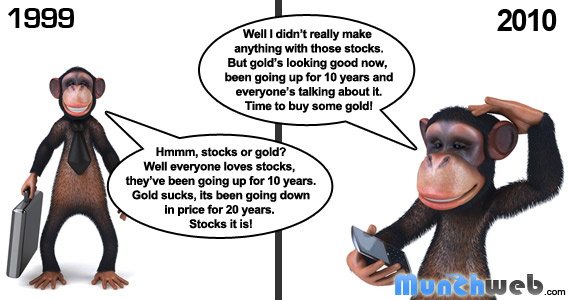 Recessions and depressions are always accompanied with reluctance towards new business opportunities. Society becomes focused on cutting back and trying to ensure financial survival.

However, as the crowd moves to the extreme in one direction the smart entrepreneur and investor dances to a different beat.

The crowd usually gets it wrong.

While spotting the important turning points is hugely difficult, it is safe to say when it comes to predicting future trends the majority of people screw up at the worst time to screw up.

When it comes to making decisions based on future trends, doing what everyone else is doing is rarely the right idea. It might work out for a short time, but usually ends up going wrong soon enough.

Going against the conventional wisdom when it comes to future trends, however short lived it might be, is difficult to do. It’s hard to ignore the millions of voices chanting the same conventional ‘wisdom’. But the more people chanting it, the more likely it is wrong.

Conventional wisdom tells most entrepreneurs and investors to avoid new businesses in a recession. The worse the recession gets and the longer it lingers, the more that idea becomes entrenched.

Starting or growing a business in a downturn is certainly not easy, far from it, that conventional wisdom is certainly coming from somewhere.

Investment is scarce, consumers are spending less, and taxes and regulations are on the rise. No wonder everyone thinks its a bad time to start a business.

But is it really?

There’s a Shake-Up of Opportunity, A Shift of Power

A downturn changes the playing field. What was once normal begins to change rapidly. Companies that got comfortable like a retired grandad in his chair, aren’t so fast at moving when the fire starts.

The downturn is also chopping away at the once sturdy legs of the traditional media industry. Ad revenues, the lifeblood of traditional media, are dropping and power is shifting to the independent publisher. Those bloggers and independant websites have lower costs, strong niche expertise, the ability to attract higher paying niche advertisers, and usually more inventive ways to make money like affiliate marketing and paid memberships.

Wealth tends not to be destroyed, but instead it just changes hands.

It’s certainly not going to be easy, but the smart and determined entrepreneur can build a growing and successful business during an economic downturn.

Such new innovative companies are key to softening the blow of the downturn and providing new opportunities for jobs and growth. The survivors and emerging business from the economic embers will pave the way for recovery. They are the future.

Take a look at a list of well known companies that started during economic downturns.