When stocks hit a major bottom in March 2009, after the biggest stock crash in decades, it was accompanied with this front page article in The Economist: ‘The bill that could break up Europe‘. 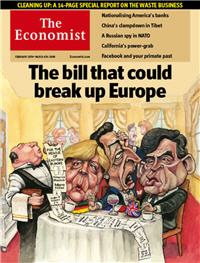 As the recession deepened protectionism became an increasing threat throughout Europe as individual countries began to become more exclusionary.

This was in contrast to the ‘You & We‘ mentality that strengthened the EU during the stock boom of the 1980s and 1990s, and the boom from 2003 to 2007 where the EU even extended into ex-soviet countries.

Now in December 2009, as stocks appear to be at or close to a top, the ‘You & We’ mentality has made a comeback with the recent introduction of the Lisbon Treaty.

The treaty had previously faced difficulty with stronger opposition during the preceding downturn in stocks. However, after several months of an aggressive recovery in stock markets across the EU, the treaty passed.

Throughout countries in Europe the ‘Us & Me’ mentality strengthened shortly after the stock market bottomed in March 2009. Various right wing and exclusionary political parties managed to gain a large number of ‘surprise’ seats in the June European elections.

For example, in the U.K the British National Party, which is ‘wholly opposed to any form of racial integration and committed to… restoring the overwhelmingly white makeup of the British population that existed prior to 1948‘, won 2 seats.

While many were shocked that so many extreme political parties gained seats across Europe, history tells us it is exactly what you would expect after a significant stock market decline. The rise and fall of the Klu Klux Klan in the early 20th century is just one historic example that fits this pattern.